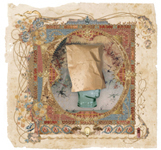 My photo art technique is a continuation of the tradition that began with collage. Where once artists gathered all their materials from disparate sources and were limited by availability and physicality; 21st century technology, software tools, and the world wide web have lifted these restraints. I interweave hundreds if not thousands of sourced elements into my work to assemble worlds from a labyrinth of intricate parts. My practice is like adhesive-free collage-making on anabolic steroids.

My themes are revealed to the viewer through a juxtaposition process that begins with image sourcing, but not by slowly leafing through magazines and picture books. It begins with a Google Images search, my collaboration with its algorithm, and the lightning-fast visual connections that occur when searching with a web browser. I call this flash sourcing.
My artistic goal is to lure my audience with intricate appeal and then upon closer inspection, to assault with disquieting content. My artistic practice examines how we might come to terms with the frictions of our discomforts and disillusionment as a way to understanding, and perhaps transcending, our hypocrisies and blindness within the contemporary world.
Illumination is the fundamental motif for a series of long-term projects that I began in 2015. I have completed four bodies of work under this umbrella: Postulates, Manifestos, Devotionals, and Anthropologies. My latest ongoing projects are Quandaries and Oceana. Quandaries is an inquiry into civilization's new dark ages, a downshift in progress; post climate change, post electricity, post democracy. To envision a world where new systems emerge, new uses emerge, people forget how things work, and what things are. Oceana is the beginning of a project that embodies the rise of future kingdoms, kings and queens who may be wielding power throughout The Age of Consequences. As with all my projects, my goal is to evoke thought and viewer discussion.
Using LightJet imaging technology harnesses my theme of Illumination within a printing process. Three digitally controlled lasers simultaneously expose the photo-sensitive emulsion onto silver halide photo paper with red, green and blue laser lights. The way LightJet prints images is the way we see the world, in RGB and not CMYK. The exposed paper is then processed in traditional photographic chemistry which creates such a strong durable surface that framing without glass is feasible.
I’ve been printing on Endura Metallic chromogenic paper, my 21st century nod to gilding. I find its iridescent finish and rich metallic appearance catch the eye and give depth to my themes of Illumination and human self-reflection. But gilded is not golden. Gilded invokes a sense of a patina covering something else. It’s the shiny exterior to the decay underneath.
-- Leslie Tucker
Loading...